Name: Monthly Luncheon
Time: 11:30 AM - 1:00 PM CDT
Registration: Sorry, registration for this event has been closed. Contact the Chamber for more information. 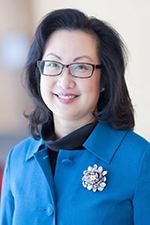 Anna Hui was appointed Director of the Department of Labor and Industrial Relations in March of 2017, with her senate confirmation following in January 2018, making her the first Asian-American to serve in a governor's cabinet in Missouri history.
For over two decades, Anna has worked in numerous senior positions in both state and federal government.
Anna started her public service career working for Illinois Governor Jim Edgar as the Special Assistant to the Governor for Asian-American affairs and then for Governor George Ryan, as a senior-member of the Washington, D.C. policy management team.
In President George W. Bush's Administration, Anna served as Associate Deputy Secretary of Labor at the U.S. Department of Labor, where she coordinated major domestic and international programs and activities on labor and workforce safety and standards issue. In that position, Anna spearheaded efforts to encourage diversity and the inclusion of historically underserved communities in the Department's programs and Federal government management.
After leaving federal service in 2009 and until she returned to Illinois in 2015, she was Chief of Staff to former U.S. Department of Labor Secretary Elaine Chao.
From 2015 to 2017, Anna served as Assistant Director and later as Acting Director of the Illinois Department of Labor. Across the Mississippi, she delivered results for workers and employers by enacting much-needed reforms, eliminating costly inefficiencies, and modernizing services and technology. She continues to do the same, and more, in Missouri.
Anna received a J.D. from Loyola University Chicago School of Law, a M.S.M. and a M.B.A. from the University of Maryland University College and B.S. in Psychology from the University of Illinois at Urbana-Champaign.  In April 2018, she was named the recipient of the Outstanding Asian American Alumni Award from the University of Illinois Asian American Cultural Center for her dedication to public service.
In addition to her duties as Department Director, Anna currently serves as Vice-Chair of the National Association of State Workforce Agencies (NASWA) Unemployment Insurance Committee and member of their Legislation Committee; sits on the NASWA Information Technology Support Center (ITSC) Steering Committee; is a Board member on the Family and Community Trust; serves as Midwest Regional Coordinator for the National Association of Government Labor Officials (NAGLO); and is a member of the International Association of Industrial Accidents Boards and Commissions (IAIABC).  She is also a member of the 2018 Leadership Missouri class.
Location:
Adams Pointe Conference Center
1400 NE Coronado Drive
Blue Springs, MO 64014
Date/Time Information:
New Member Showcase begins at 11:15 am Buffet opens at 11:30 am Program starts at Noon
Set a Reminder:
Business Directory Events Calendar Hot Deals Member To Member Deals Job Postings Contact Us Weather